The Yungang Caves in photos

The Yungang Grottoes, located near Datong, are a site to be discovered along the journey between Beijing and Xi’an.

The caves of Yungang or “Cloudy Crete” are located 16 km west of Datong, extend about 1 km from east to west and contain more than 50,000 Buddhist statues, of Persian influence, Byzantine, Greek and Hindu, including a colossal statue of Buddha of 17m high.

A legend tells that during the Northern Wei Dynasty, Emperor Tai Wu suddenly gave up Buddhism and ordered its eradication. Many monks were hunted, and temples destroyed, but his eradication campaign just started, he fell ill and died. His grandson succeeded him as Emperor. The latter, interpreting the death of his grandfather as a sign of divine punishment, did everything in his power to revive Buddhism, and so he ordered the construction of the Yungang caves at the foot of Mount Wuzhou (one of the five sacred mountains of China). More than ten thousand men were employed. The construction of the site came to an end when the capital was moved from Datong to Luoyang.

In 2001, the site was classified as a UNESCO World Heritage Site.

Plan half a day for the visit.

From Central Station, take the tourist bus line 603 (3¥). Get off at Yungang 云冈 after around 1hour driving.

Tip: Start early in the morning and plan a picnic, the park is nice for that. 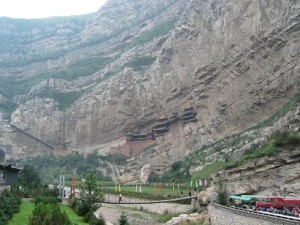 Yungang Caves - 云冈石窟 : all our tours and trips